Sometimes, being a runaway and accepting the kindness of strangers brings you home again.

You look up from your breakfast cereal as a 7-year old and your mother tells you you’re a helium balloon.

“You will always need a hand to hold that balloon string,” she says. “Or you’ll just drift away on the breeze.”

My mother knew early on that I would never really be settled. To make it in this rigid world, I would need ties to something solid.  When her steady hand vaporized in a terrible accident, I knew those ties wouldn’t likely be human anymore. I made it on my own, and settled in with what I could live with:  horses, dogs, wildlife, career.

On left are the first horses of my life, strolling through small town Midwest like you do. On right is the last horse, when he and my nephew were about the same age.

I earned my way and gave back a lot of volunteer time. I traveled, learned new outdoor sports, and almost bit the dust a few times. When my first career betrayed me, I found a new one to support my home, hobbies, and animal companions. 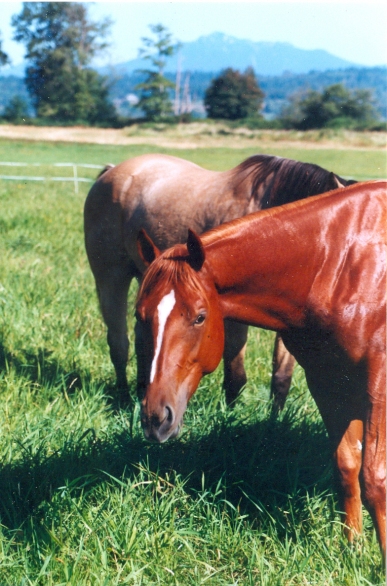 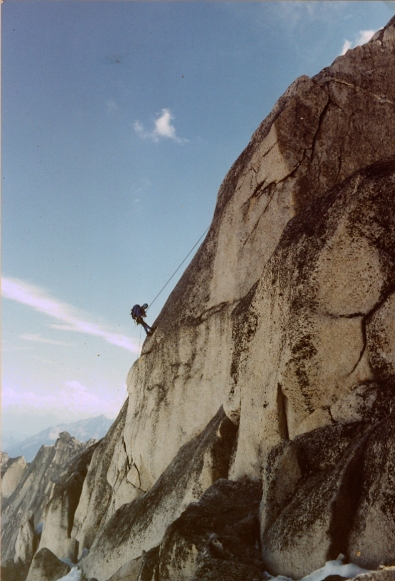 Then slowly, I lost one animal after another to age and illness.  After awhile I didn’t replace them; it was tiring being the Noble Queen of Death. Twenty years after he arrived, my last horse died in agony at my feet this spring. I watched him chained up into a truck bed and hauled away. Now it’s just me, the wildlife, my doubts, and my job.

After Larkey died, my unmoored balloon went adrift. The first week, I donned my barn clothes by habit every morning, but there was no one to feed. I didn’t go out to his paddock when I got home from work. There was no one to turn in, and nothing but signs of struggle there.

I was wracked with guilt about the ten thousand lost moments when I could have done something better for him after his brother died. All the times I worked too long, rushed chores, and left him to eat dinner alone. Sometimes I left him alone for my travels.

I tried to reimagine the barn. I planted flowers in his feed bins. I left the doors open day and night because closed, it looked like a tomb that might trap him if he ever decided to come back.

Still, nightmares drove me sleepwalking to feed ghosts in the barn. Reassuring daily routines ended. I had failed Larkey. I failed all of them. Everyone and everything.

Before I drove myself crazy, I did what comes naturally: pack up and go. I’m guessing most folks don’t take two back-to-back 1000- mile road trips to Saskatchewan just to get away. But that first drive in June meant hours to daydream, the ghosts disappearing in between the highway lines flowing past the rearview mirror. 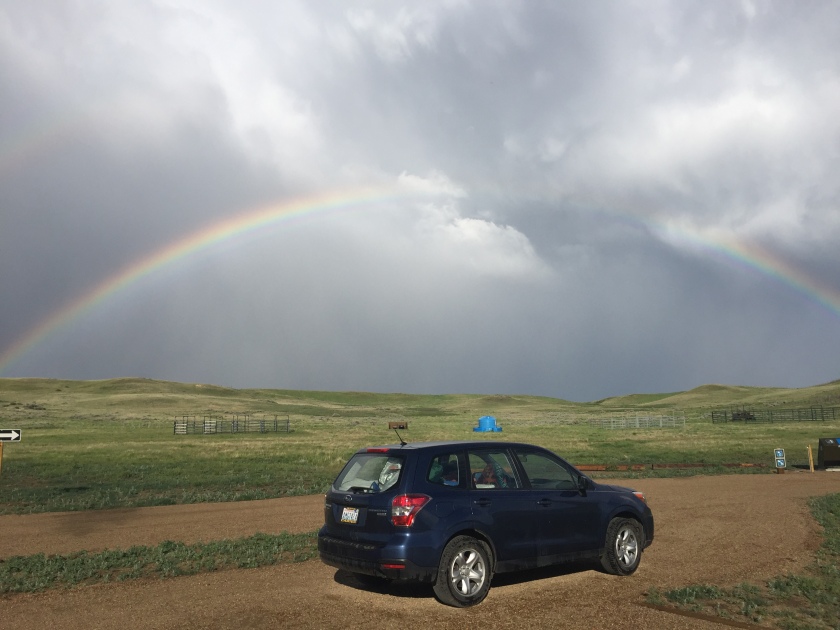 And Saskatchewan welcomes wandering souls looking to lose themselves to endless sky and mysterious lands. The northern reach of the Great Plains, southern Saskatchewan is scoured by ancient glacial floods and swept constantly by wind. Where the land is not broken for crops, dinosaurs sleep in shallow soil beneath the bones of bison and the stones of tipi camps.

On a few high plateaus, forests cluster against potential invasion by the surrounding plain. The Frenchman River bends upon itself in a tight ribbon, winding through dry country on its way to meet the Milk and the Missouri.

After storms roll over the land, emerging sunlight light illuminates the rivulets of long-evaporated torrents. After the wind and lightning, sometimes stinging hail, you can step into the low sun and let grief rise on the wind and draw into the retreating clouds.

Lest you think I wallow in drama, know that I am damn good at putting on a face and going through the motions. I made it through college finals two weeks after my mother was killed. I lent a shoulder and an ear to anyone who needed it when a friend shot herself. I’m a pro. I don’t cry.

And I know how to occupy myself while the worst of the hurt fades.

So it made perfect sense to return to Saskatchewan when a budding Parks Canada paleontologist told me that Grasslands National Park hosts a fossil hunting week in August.  Hunt for dinosaur fossils? Sure, never done that. Never met a live paleontologist.  Hang with the visitors and locals who come for barbecue and music on Saturday? Perfect. I could have fun playing science tourist, put on a face, and forget.

Then my mask got knocked a little sideways when the horses started arriving for the Saturday wagon rides.  These are tourist rides. Not long rides, but long enough to make you wonder how the backs of westward-bound pioneers did not break as their wagons rumbled across on the prairie. At the turnaround point, a young interpreter gives a short talk about grasslands. Other local folk bring their horses and ride along.

A rancher with one arm packed in a sling rode a white horse. No, they don’t need shoes here, she answered.  It’s dry enough that their feet don’t go soft and sag, get bruised by rocks and then abcess. And shoes would be terrible fire hazard, with metal spraying sparks from rocks. Of course, I said. She knew what rain rot is, and why our West Coast horses wear blankets when the skies cry all winter.

Then there was the dun horse.  I know what dun is: a gene that dilutes the hair color but leaves a pattern of dark hair in a dorsal stripe and ear tips. Tail and legs can be dark, with a “primitive” zebra pattern on the lower legs. I know this from books, but I’d never met one. It’s a different color, subtle, maybe not flashy enough for some of the more chrome-conscious horse folks I’ve known.

I asked Mr. Norris if he was raising his horses, but no, he said they were bought. The family had given up on horses and used ATVs. He still rode. He asked me if I had horses.

“No, lost the last one. Likely bad colic, couldn’t do anything by the time I found him. You know how it goes.” I looked away at the hills.

We got back from the short, joint-wracking ride with time to spare before the barbecue. I sat on the porch of my rental tent cabin and watched the wagons and riders leave again. After they returned, a jackrabbit thought triggered me to grab my camera and go down to the gathering place.  I found Mr. Norris and his dun horse.

“Do you mind if I take a photo or two of your horse?” I asked. “I do some art, and I’d like to sketch your horse.  I’ve never seen a dun before.”

I couldn’t tell him I lacked the heart to put my own to paper or canvas.

He helped me get the horse’s attention, because a horse will always back its ears up and lay them flat when it sees a camera.  They’re not like kids today, who spring into a pose when a lens appears. It’s beneath horses to clown for cameras.

Then Mr. Norris handed me a rein and just said, “Here, hang on to this.” He walked away.

I wouldn’t get on someone else’s horse unless expressly invited, but I wondered anyway. Instead, I did post duty and held the horse, carrying out what even the most outwardly polite, well trained horse appreciates: ear scratching.

“Getting on that widow maker?” asked a wagon driver.

I smiled and rubbed the horse’s neck, watching for the eyelid droop that signals a polite horse is grateful.

When Mr. Norris came back, I handed the reins back and thanked him.

He swung up into the saddle for the next ride along and said, “You know what Winston Churchill said, right? The outside of a horse is good for the inside of a man. Or in your case, a woman.”

And it finally stopped. The bleeding inside, the catholic guilt. Something closed up, something quieted down. Without meaning to, Mr. Norris and his dun horse rode off with my ghosts and buried them somewhere in the sunburnt grass, the dusty ancient floodway, lying out there with the dinosaurs and the bison bones.

I went to the barbecue, and sat peaceful for the paleontology talk and music by local folk. It was like being back in small town Midwest again, only with science. 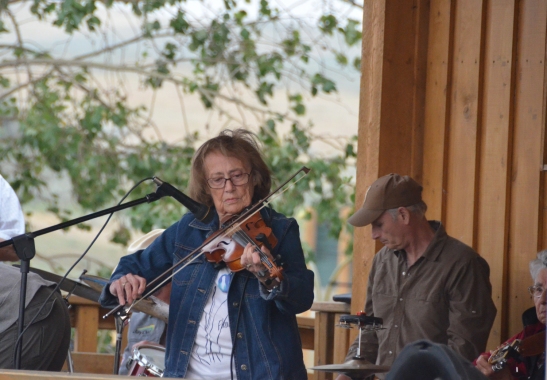 When I drove into my yard a few days later, the barn stood peeling in the sun. It was just a messy, neglected building needing painting and a good cleanout. Barn swallows, garter snakes, and bats ruled it all summer. Mud nests bulged from rafters. Occasional domes of guano ate at the concrete aggregate in the aisle. Feathers drifted in puffs of breeze.

Dusty water buckets and empty brush bins leaned unsteady in crooked stacks. The tarps still laid balled up on the floor from that last numb run to the dump with blankets and halters.

It was just a barn again. Labor Day was coming. I could start cleaning it then.

I closed the doors.