Waking up in a postage stamp picture

Somehow I missed that stage in adulthood where people decide camping is too hard, and either stay in motels or travel in trailers with a compact semblance of home.  I hit motels on long driving days, or when I need a shower and a real meal.

The memory of lying at night on a guest bed in my grandma’s screened porch stuck with me. Away from noisy, scorching inner-city Chicago, I watched fireflies in the cool night air, fell asleep with the sound of crickets, and woke to the sound of birds. To this day, I leave my windows open in summer, with birds as my alarm clock.

Buffalo Camp at American Prairie Reserve is my yard multiplied, with bison to boot. When I traveled to the Reserve in May, I woke up each morning to big skies and birdsong. As I was making coffee, a bachelor band of bison would wander by, taking a leisurely breakfast.  Deer often tiptoed behind them looking like spies trying to fade into a crowd. A medley of colorful birds made the rounds, hopping from ground to shrub to sign or platform.  Rabbits hopped, nibbled, and hopped again, ever watchful.

Any postcard picture has a few stories hidden behind the carefully crafted image.  During last September’s trip, I woke one night to a terrible thumping under the hood of my car, and found a rabbit trying to turn it into a burrow.  I am told they can eat wiring and hoses in the process, so I was lucky to catch it early.  The trick is to move the car every day, which feels wrong when the stay is meant to be about hiking.

The first night of this trip, I woke in the night and decided conditions were right to view a universe of stars without the light pollution of home.  I strolled to the bathroom without a headlamp, and stood outside afterward to gaze upward. Something caught my ear: the croaking of a bullfrog?  Not quite awake, I thought it seemed odd.  Then another croak, then another.  Suddenly I realized that there simply wasn’t enough water for bullfrogs. Those sounds were grunts coming from bison lying around the bathroom.  I carefully retreated down the path.

A couple nights later, I woke to a grunt and sniff right behind my head.  The only thing between me and the bison was flimsy yellow-green nylon.  I wasn’t worried about getting stepped on since the tent was elevated on a platform. The tent was tied down right on the edge of the platform instead of the middle, so he could stand there and investigate it.  I wasn’t sure what – if anything- to worry about.

I could hear the animal lower himself to the ground, first one end, then the other. He lay right behind me, close enough that I could smell him.  His head moved back and forth like he was grooming, and he leaned back on the tent. He may have been scratching off loose hair with his horns.  Little gurgling sounds bubbled up from the digestive labyrinth that processes and re-processes food.  He seemed to burp.

I’m one of those people who can fall asleep anywhere, like crowded train stations in foreign countries where unguarded, you can be robbed or killed.  I’m usually awake and curious, but if I need sleep, I can get it.  In this case, I fell asleep after awhile because I was tired from hiking and had no choice.  I woke to a sigh, the sound of cloven hooves scraping gravel, and one slow step after another as he walked away.

The next morning, as on most mornings I was there, the sun rose on what looked like a scene printed on a historic postage stamp.  Bison and deer, birds in the sage and shrubs and trees, pale yellow willow catkins lighting up in the sun. 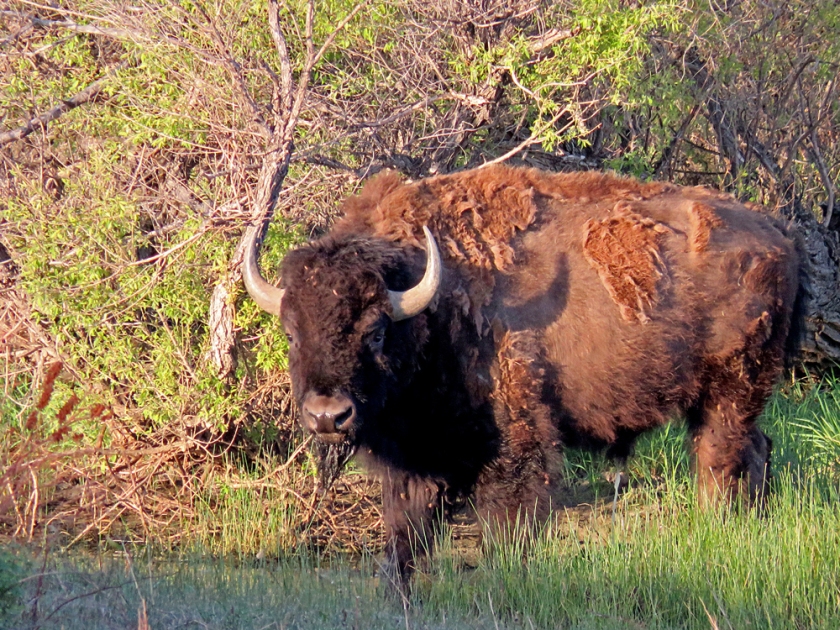 There are no longer herds of bison, deer, and antelope stretching for miles.  And I’m camping, but I have food and water with me, portable electronics and a high speed way to reach a doctor or grocery store if I need to.  I’m housed in hi-tech fabric and poles. I’m sleeping swathed in synthetic fabric, not skins.

But here in Buffalo Camp, I could imagine myself as one of the early foreign travelers  as I stepped out of my shelter to a dazzling variety of life moving across the landscape.

For more views of Buffalo Camp, watch the rough little video below.  To check it out yourself, visit here.