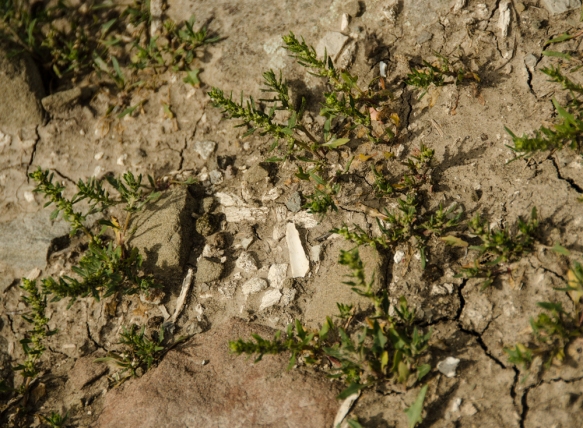 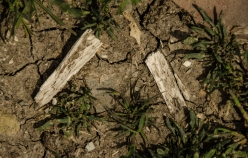 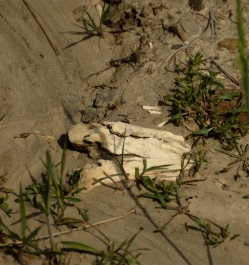 I took photos of every piece of bone I saw.  I knew from the ranger that burrowing animals would push them to the surface, but they lay everywhere.  Water dug bone from the hillside and pooled shards in drying streams of dirt.  What looked like rocks sticking out of the soil turned out to be bone. Below the cliff where the buffalo fell, the hillside weeps bone fragments.

“That’s where blood kettles would have been,” she said.  “The Indians would line a pit with hide, add blood from the animals, and break bones to get marrow for blood pudding.”

I looked at the hillside, struggling to put myself in that scene. What was it like to process hundreds of bison for every ounce of nutrition and material possible?

Many Americans who eat meat know little about hunting or raising livestock. As travelers, we are sometimes disgusted by people’s diets- even in first world countries.

At First Peoples Buffalo Jump, gaze at the hillside weeping bone shards and reflect. What if we were Great Plains Indians reliant upon our skills and efforts to harvest our own meals?

My school education about buffalo jumps included the usual two-sentence sense of their nature and purpose.

“Indians chased buffalo off cliffs for food, clothing and shelter. They processed what they could use and left behind the rest.” That gets filtered into “they were lazy and wasteful” in modern conversation.

My first visit to a jump at American Prairie Reserve stirred my curiosity. I added a side trip to Madison Buffalo Jump State Park, where great interpretive signage told me more. I purchased books and perused Web pages. My itinerary this spring included First Peoples Buffalo Jump in Ulm, Montana.

My inner scientist started questioning those two sentences after that first trip.  I know that bison are dangerous, so any mechanical means of harvest reduces risk to people. 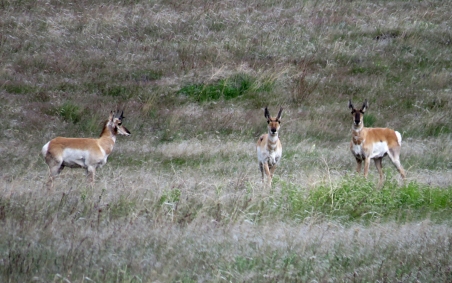 And I figured any leftovers from a kill would not go to waste. A broad range of wildlife and insects would appreciate the remains in spare sage country. The rest would nourish the soils for plants and other animals.

What I see now is how complex hunting rituals were, how great the need for these periodic harvests, and how diverse the range of uses for bison parts.

A perspective on waste

Living on the Great Plains before guns and combines, you would never take food for granted.  Communal hunting and fishing would keep people fed and reduce danger. An infographic in this blog article says that one hunt at a buffalo jump could feed 400 people for over 3 months.

Plains Indians developed many uses for buffalo parts and pieces. They used everything from brain to sinew for shelter, tools, containers and clothing. You can experience this and even touch items at the superb First Peoples Interpretive Center.

And don’t call out food waste before reviewing your behavior. Nowadays, we are the pot calling any kettle black on food waste. We won’t buy “ugly food”. We toss 30% of the food we buy.

Food waste is a longstanding problem. A ranger at First Peoples said that white Americans considered buffalo tongue a delicacy. They would fell a one-ton animal for the tongue only- just like sharks today die for fin soup. We blew away bison from train windows for sport, then harvested dried bones when we needed fertilizer.

Eating off the land requires skill and community

We are losing the ability to feed ourselves. Like many, I am adapted to read at close range and to see by electric light. My eyes are becoming hard with age like everyone who lives longer than nature intended. Based on eyesight alone, I would be reliant on community for food.

I know I don’t have the right muscles or coordination for hunt or harvest. I spent hours as a child picking berries and processing smelt. I have grown vegetables and helped process deer and chickens. I eat meat, but my modern sense of smell means the odor of burnt feathers and raw blood turns my stomach for days.

I know that without the modern food industry, I would not be here. But even the most fit and keen-eyed among us would have a hard time gathering and processing all our food. In a post-apocalyptic world where rats, pigeons, and cockroaches still roam, it won’t be easy.

It was about culture, too

The Plains Indians recognized the blessing of animals and plants. Like the Inuit, they developed rituals that included a conversation with a food animal.  The book title, “I Will Be Meat for My Salish” describes that conversation.

According to the Smithsonian Institute, “Because the bison provided many gifts—from tipis and clothing made from hides to soap from fat and tools made from bones—they were honored as relatives and paid tribute to through songs, dance and prayers.” 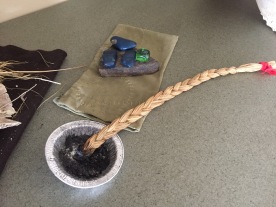 Now, my neighbors say a blessing for each meal, whether it is home cooked or take out.  They are rare.  Most folks in the U.S. take our food for granted.  We assume it will always be there.  Eating is either perfunctory, or a fitness-enhancing project.

To be fair, it’s hard to connect processed, shrink-wrapped food to the earth.  Eating over work at a computer, as I and others often do, means you’re absent-mindedly putting calories in your mouth. A foil-wrapped energy bar or vitamin drink seems more appropriate for the lab than the land.

We don’t have rituals to recognize the blessedness of food in our lives. We don’t create a structure where our food can agree to be part of us;  we presuppose it.

“In addition to the use of their physical body, American Indians modeled social behavior from observing bison, such as how to live in a healthy and productive manner. Some of the important lessons were breastfeeding offspring, valuing both young and old, being physically active, respecting both the female and the male, healthy eating and using resources wisely.”

In this country, we grow increasingly weighty. We revere celebrity on dubious merits. We fear marginalization and even abandonment as we age.  Enough said. Maybe we need a few chats with those bison.

Moving past those two sentences

Our old school books were likely colored by hypocrisy, historical guilt, a tinge of racism, and almost complete separation from nature.

It is well worth a visit to a buffalo jump to challenge that education. Stand there and imagine what it is like to rely on yourself, your community, and the land for sustenance.

If you spend time at a buffalo jump, you begin to see the landscape differently. You find yourself gazing over the plains at hillsides. You think “Hey, couldn’t you chase a bunch of buffalo over that cliff, too?” You begin to recognize grazing and driving areas, and good features for a jump- flat space below, and water.

You see beyond those two sentences you learned in elementary school. Now you understand why some hillsides weep bones.

2 thoughts on “The hillside weeps bones”