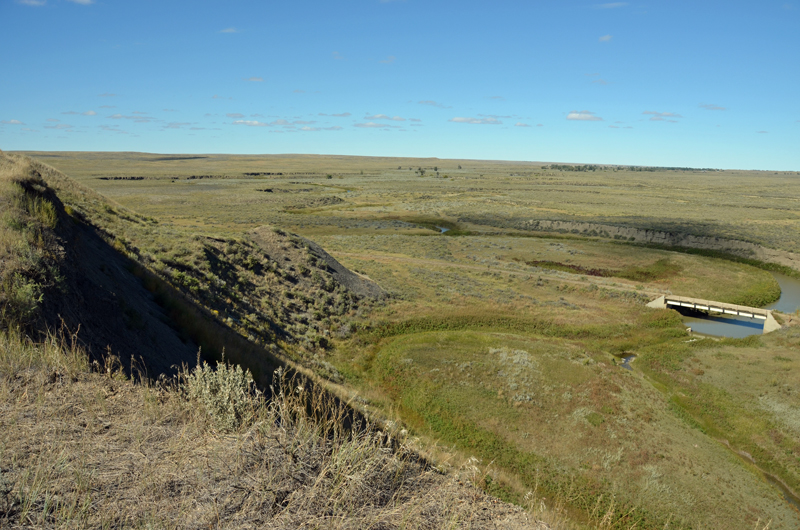 September 2016- On my first day at American Prairie Reserve, I decided to walk the road to the Buffalo Jump by Jones and Telegraph Creeks.  I loaded up a pack with water, lunch, snacks, clothes, and binoculars, brought two cameras, and set off on foot, using the same mode of transportation as the Plains Indians to approach the site hundreds of years ago.

Why walk?  It’s a decent gravel road. Trucks haul trailers on this road. People drive and mountain bike it. Walking the road is unusual enough that a USFWS ranger stopped to ask if I needed help.

I could have gotten there in my car and then added on a whole lot more to my day, but there are many reasons to walk. First, because I can.  As a young-in-life owner of a fake hip joint, I know what it feels like to hobble in agony 1/3 mile down a flat road to the mailbox.  I know how small the world becomes when everything is about managing pain, how you lose peripheral vision and fight discouragement. Walking for me – and many people- is a restored blessing, and I don’t take it for granted.

I wanted to take it slow, look at the landscape, find the little things.  I couldn’t do that from a car or bike.  And finally, I’m so sick of sitting in a cubicle, a car, a train, a bus that I could run screaming. I wanted outside, sun and wind on my face.

After a mile or so past camp, I passed the Enrico Science Center, a remodeled ranch home. The vans you see parked there were assisting the 2016 Transect, an 11-day trek across North Central Montana hosted by APR.  I ran into the group and APR staff at the Buffalo Jump and was instantly converted by their sunny friendliness (shocking, as I live in the land of the notoriously unfriendly “Seattle Freeze”).

On my trek to the jump,  I found butterflies, prairie dogs, and of course, bison.  I flushed upland birds (probably grouse), took pictures of tracks and scat, and put one foot in front of the other,  mile after mile.

The road traverses into Charles M. Russell National Wildlife Refuge, and eventually crosses a bridge over what I believe is Jones Creek.  By that time I’d met the ranger, who sympathetically gave me his NWR map, saying I would need it, and recommending a trip to the elk viewing area on the auto tour road (later post on that).

The road wound upward to the top of a hill blanketed with clumps of yellow-flowered brush perhaps marking where long-ago tipis would have stood as the First Peoples prepared to herd bison to their death below.

Buffalo jumps may seem gruesome to us today because we don’t see our food die. Unless we’re farmers or hunters, harvest occurs in slaughterhouses far away from our tables. For all we know, steaks are made in a factory and shrink-wrapped in plastic and styrofoam.

First Peoples used suitable natural cliff formations in an organized effort to harvest an animal that at the time, was far more dangerous to hunt on foot.  Buffalo jumps are full of secrets from long ago:  no one seems to have a good handle on the dates they were used, and conventional wisdom about their use falls all the time. The only thing that seems sure is that Plains Indians stopped using the jumps when horses became available.

Like me, the Plains Indians would have reached the jump on foot.  Unlike me, they were supremely fit, trained, acculturated, and prepared for a dangerous effort critical to their survival.Experience and ritual guided a highly coordinated effort.

Buffalo jumps are sacred to Native Americans even though all known jumps have been excavated, sometimes for bones to be used as fertilizer and other times to either steal or preserve the past. Out of respect, I ate my lunch across the road from the jump, where I met the friendly people on the APR Transect.

I didn’t really know what to look for at these sites until I later visitied the Madison Buffalo Jump. There, I was enlightened by excellent, informative signage, and could imagine the drive up a ramp behind the jump, and the massive processing occuring near a creek below the jump.  I’m glad there isn’t signage at APR- it would have stood out by a mile in the landscape- but I will go there again with wiser eyes after having done some reading.

On the return trip, I passed two little snakes in the road, enjoying the heat of day.  One was a Western rattlesnake, the other I can’t tell (looks like a prairie hognose, but doesn’t have the upturned nose- so much for pictures on the Web). 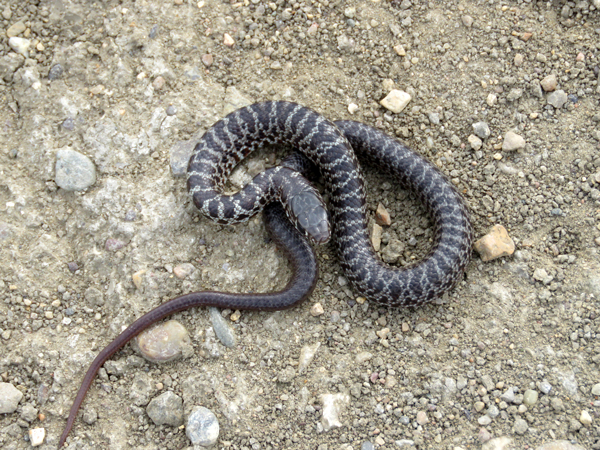 …even when they are something we need to watch for

I thought about all the perils the Plains Indians faced just trying to survive.  Weather, starvation, predators, snakes, childbirth, and on and on. If I had lived then, I would have been among the women processing bison for hide, meat, brain, sinew, bladder.  One of the women working for the survival of my people. And yet, the only thing I have in common with those brave, strong women was that I came to the site on foot. 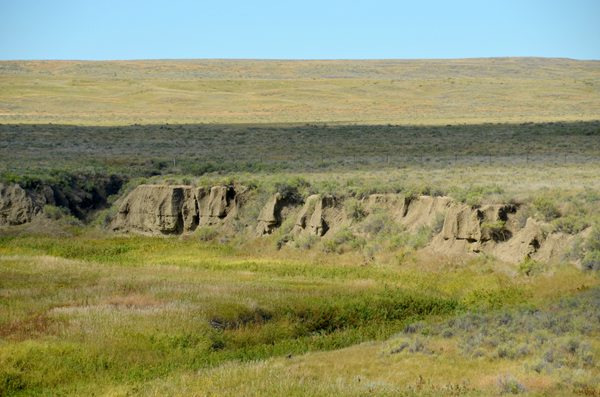 One thought on “Walking the Jumps”