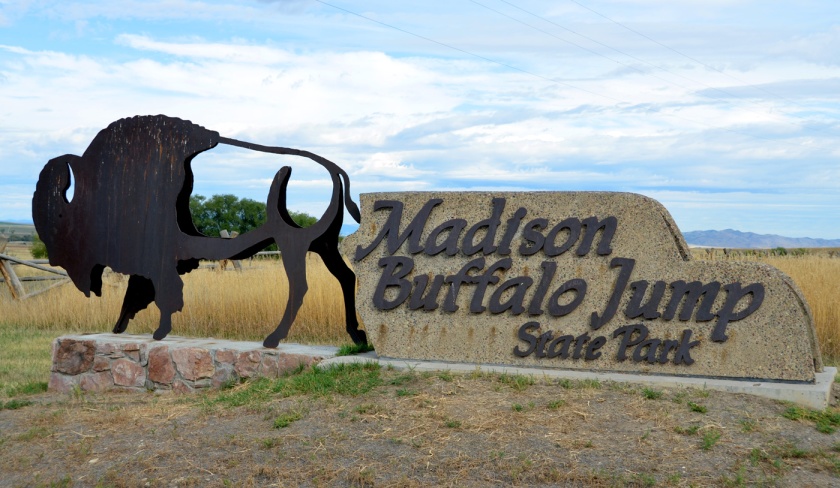 September 2016- Visiting the buffalo jump at American Prairie Reserve was a little like falling down a rabbit hole.   I’m positively the worst for spying something new (to me at least) and following it where ever it goes. I already heard about buffalo jumps  a couple years ago from a state park employee and fellow workshop trainee. After my first visit to the APR jump, the rabbit in the waistcoat appeared, and after him I went.

What’s a buffalo jump? For thousands of years, Plains Indians staged complex, collaborative efforts to lure bison toward a carefully selected cliff, then trigger a stampede that would send them running over it to their deaths.  Runners were trained from youth, like Olympians.  Their hunting life may have been equally short.

Buffalo jumps hold their secrets. Maybe the practice started with bison, as legend tells it, or perhaps early humans hunting woolly mammoths figured out it was safer to trick them into plummeting over a cliff than hunting them on foot.Use of North American buffalo hunts supposedly ended 1500-1700-ish, when horses allowed year-round hunting of bison, but there is at least one later account that involves horses and guns. Earliest hunters used less of the animals than later groups, and there is evidence of “gourmet butchering” at an early Folsom site.

The details will be worried over by academicians and tribes, but you can skip the intellectual discussion, visit the places and fire up your imagination.  I was lucky enough to find Madison Buffalo Jump State Park completely abandoned on a September Tuesday and spent a few hours hiking and imagining the dramatic hunt.

Montana State Parks did a great job with the language on the signs:  one walks through the entire process, from pre-hunt rituals to buffalo runners luring grazing bison forward, running them into drive lines with buffalo “frighteners” on either side, then causing them to stampede over the cliff to a slope below.  The front runners would have to leap to safe places on ledges below.  The bison that survived the fall would be finished off and then a mass effort to process commenced.

It’s obvious in this Google Earth aerial what made the Madison Jump a good site, but I suggest going there and walking it to imagine the logistics and danger involved first hand. After all, the Plains Indians didn’t find the site on the internet, and neither should you. 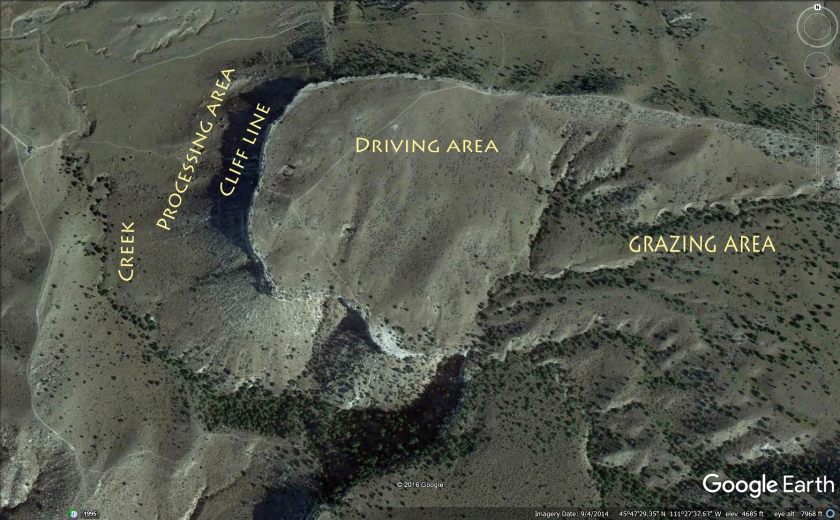 And if you’re blessed to find yourself without other people distracting you, the lonely site is a perfect place to walk and imagine you’re wearing a buffalo runner disguise. You can hear the bison herd vocalizing in low rumblings that drift in from far away.

Your walk begins at the end of the hunt. As you hike up the old buffalo trail leading around the north side of the cliff, look at the processing area and imagine groups of women killing bellowing, immobilized bison after they’ve fallen. Imagine a staging area for processing, with the same women energetically removing hide, meat, organs, sinew for housing, clothing, tools, and food.

Farther up the trail, the grazing and driving areas start coming into view.  You can see the natural ramp that winds toward the jump and imagine runners luring the animals forward, careful not to start a stampede too soon and lose the whole herd.  Rock cairns along the way would guide the animals and hide “frighteners”. The animals would be restless, unsure, but move forward warily.  They would be twitchy, ready to bolt and turn the whole herd into a boiling mass of big brown bodies, horns, and hooves.

And then toward the top, on the last rist to the cliff, the frighteners would make thunder happen.  Runners disguised by wolf hides would leap out whooping, yelling, scaring the animals into a blind stampede.  Runners up front might have to leap to ledges below and out of the way as the pounding herd ran straight for the cliff edge and over.  As you stand with a bison’s last view, you understand.  You can feel your blood pounding in your ears, hear the bellows and people shouting and grass and insects and dust kicked up into a storm around you.  You hear the thuds below. 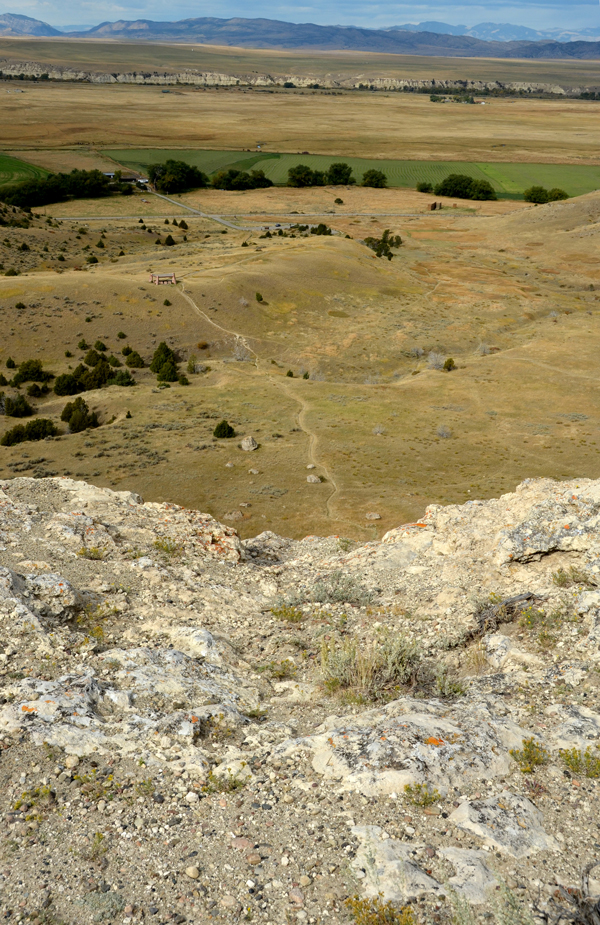 It would be quiet afterward once the last animal bled out and expired.  The hunters would be drained, completely spent from exertion and adrenaline.  Maybe some would be injured.  Maybe part of the herd balked, peeled away, and stampeded away to safety, or ended up in the forested bowl below the other side of the cliff. 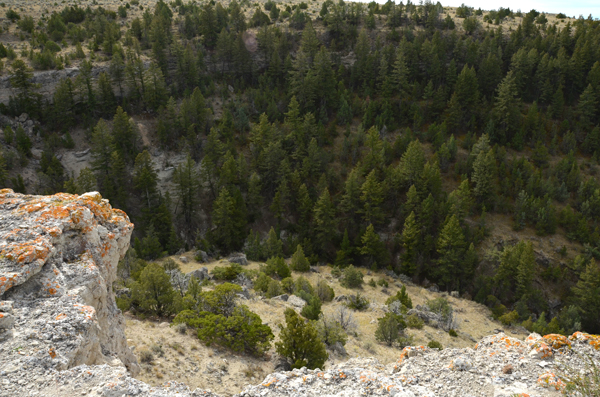 I sat on the cliff and drank a bottle of water, gazing at the expansive view as the imaginary hunt faded in my mind.  A few hunter-leery deer tip-toed into view before they caught sight and scent of me and bounded away.  The loud rattling calls of sandhill cranes rose from the river snaking through the Madison River Valley past green crop circles. 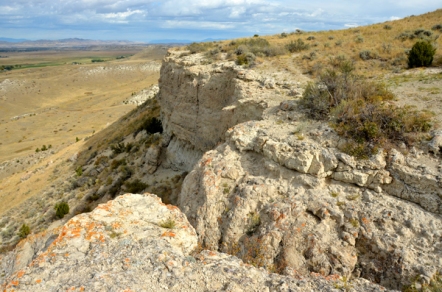 These jumps were abandoned long ago by native hunters, and then excavated for bone to use as fertilizer.  I’m sure artifact pilfering has been common.

But the feeling of the place is powerful enough that it will draw me back.  I’ll read some books, look for documentaries, research Native American perspectives on the jumps.  I’ll go to First People’s Buffalo Jump in Ulm the next trip.  I’ll walk where the bison walked, be the animal next time, and not imagine myself as a specatator of a movie in my head.  It’s that crazy rabbit hole again.